ACT Fire & Rescue began its life in 1913 as The Canberra Fire Brigade, administered from Melbourne and lead by Mr Percy Douglas who, after a year of supervising the volunteer firefighters, was appointed as the first Chief Officer in 1914. 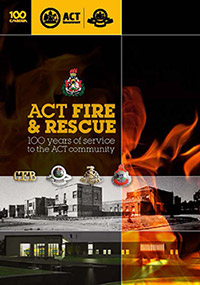 Mr Douglas was allocated the phone number “Canberra 1” for the Brigade headquarters near Acton Guest House on the Molonglo River.

Back then, the brigade consisted of only 2 volunteers, the officer, Mr Douglas, and a horse drawn cart.

During World War 1, the Brigade was disbanded, but it was reformed in 1924 with Mr Percy Douglas again at the helm. In that same year, the Brigade received its first motorised appliance, a 1914 Hotchkiss, a motor-powered, combined fire engine and ambulance which served the Brigade into the 1930’s.

By 1932, the Brigade had expanded to include five paid firefighters and three appliances. It operated from a building near the Kingston Railway station.

In 1935, the Brigade was amalgamated with the Ambulance Service to form the Fire Service, which was administered by the Department of Interior. The combined service was moved into the new purpose-built Forrest Fire Station and residences in 1939 (a rare example of inter-war functionalist architecture later added to the ACT Heritage Register).

In 1958, the Fire Service’s administrative responsibility was moved from Melbourne to the NSW Board of Fire Commissioners.

In the 1960s, the Canberra population was increasing rapidly, so the Brigade’s second station was opened in Ainslie in 1962.

As Canberra grew, it became apparent that there was no longer a need for the Brigade to be controlled by NSW. In 1974, new legislation was drafted to move responsibility to the Department of Territories. This legislation was ratified in 1976, and the ACT Fire Brigade was born.

With the addition of 50 new recruits from the ACT College, some of whom still serve the Canberra Community today, the decision was made that a new training centre was needed. On 2 February 1979, the Brigade officially opened the Belconnen Training Centre which featured a 50 metre training tower. This added much-needed facilities which enabled the Brigade to provide adequately for the safety of the Canberra community. Stations built in previous years included Phillip in 1969 and Belconnen in 1971, bringing the total number of stations to four.

In 1979, a station was added to the suburb of Kambah and, in the 1980s, the brigade was further-expanded to keep up with the growing population. New fire stations were then built in Charnwood (1981), Fyshwick (1983) and Chisholm (1986). Following this, stations were added in the new town centres of Tuggeranong (Greenway) in 1990 and Gungahlin in 1998, bringing the total number of stations to nine. Fyshwick Station adopted the mantle of Fire Station No 1 after Forrest was decommissioned in the 1980s. Forrest Fire Station continued to be a communications centre for the Fire Brigade until this function moved to the Emergency Services Bureau (ESB) Headquarters in Curtin.

Following the Canberra bushfires in 2003, recommendations from the Inquiry resulted in the ACT ESB becoming a Statutory Authority known as the ACT Emergency Services Authority.

The ACT Fire Brigade was renamed ACT Fire & Rescue in 2011, to better reflect the diverse range of capabilities, including rescue services, the organisation provides to the ACT community.

Currently, ACT Fire & Rescue has nine stations throughout the ACT, more than 330 staff and 34 vehicles in its fleet.

Read more about the history of ACT Fire & Rescue at the Fire Brigade Historical Society of the ACT Facebook page.