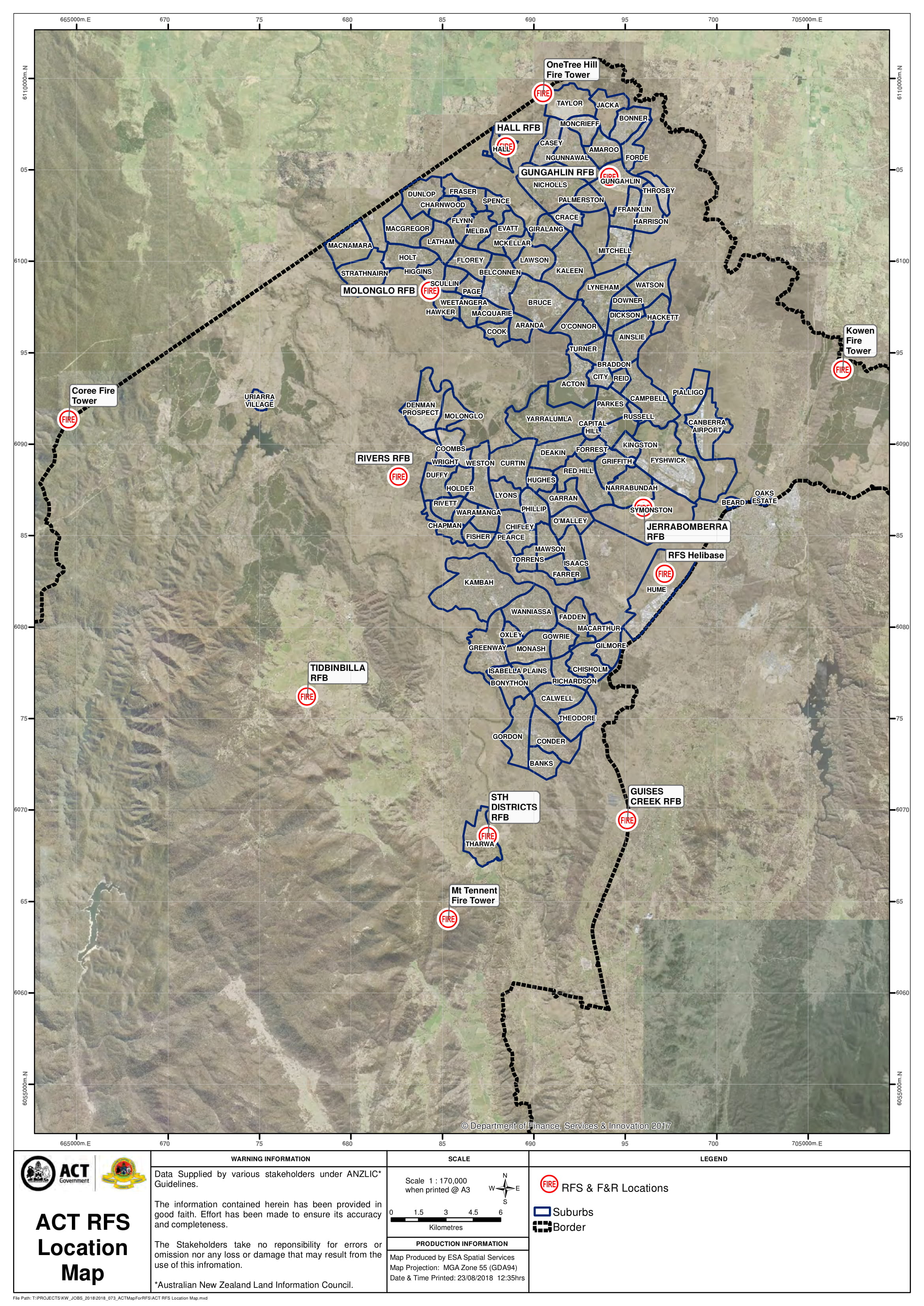 The Guises Creek Rural Fire Brigade is located on the corner of Old Cooma Road and the Monaro Highway Royalla. The ages of the members vary from 17 to 65 years and come from all walks of life, with experience in fire fighting ranging from a few months to over 30 years.

The Brigade has a strong family commitment and is well supported by the rural community. Training is undertaken every second Wednesday night all year round working as a team member on one of our crews under the supervision of our more experienced Officers.

The volunteers partake in a wide range of activities including Community awareness, School Fetes, Markets and Community Festivals. The Brigade attends fires locally in and around the ACT and also supports interstate deployments.

The Gungahlin Brigade of the ACT Rural Fire Service (ACTRFS) is based at the Gungahlin Joint Emergency Services Complex (JESC) located in the central business area of Gungahlin. The JESC is a multi-user facility shared with the AFP (ACT Policing), ACT Fire Brigade, ACT Ambulance and the ACT State Emergency Service.

Gungahlin is a vibrant and rapidly growing area with several new suburbs and a population of over 40,000 people. With strength of approximately 50 personnel, with a broad range of firefighting backgrounds, the Gungahlin brigade has responsibility for the north and north-eastern approaches to the ACT.

The brigade actively engages in supporting the local community through education and public events. The Gungahlin brigade trains each Wednesday night during the fire season and fortnightly during the off-season.

We regret to advise that Gungahlin has no available openings in the coming 2019/20 fire season for new members who have no previous experience, and waiting lists currently apply.  However, should you be prepared to be placed on the waiting list for the 2020/21 fire season, please contact the Membership Support Officer on 6207 9991 or by email RFS@act.gov.au

The Hall Volunteer Rural Fire brigade located on Loftus street, Hall, is a community service aimed at protecting and educating the community of Hall and surrounding areas about bushfires. Hall brigade offers operational (fire fighting) and support (administration, communications etc) positions, for members 16 years and up, as well as a Junior Brigade for those 12 to 16 years old.

Jerrabomberra RFS Brigade is named after the Jerrabomberra Valley area and was officially formed on the 11th November 1986.

Originally established as the Woden Volunteer Fire Brigade in 1952 after devastating fires swept through the area, it is now based in Symonston on Jerrabomberra Ave. The brigade covers the central and eastern rural areas of the ACT including areas of Mt Ainslie, Mt Mugga, Red Hill, Isaacs Ridge, Kowen Forest.

The Brigade is well equipped to assist the community with 3 Heavy Tankers, 2 Light Units and a Remote Area Fire Team (RAFT) to respond to grass, scrub and forest fires throughout the ACT, including support to surrounding NSW areas and to large scale fires in other states such as the 2009 Victorian 'Black Saturday' Fires.

The brigade also regularly supports the SES to flood and storm damage incidents and conducts a number of community education, fundraising and social events throughout the year.

The Brigade is family welcoming, has a good mixed aged membership base and is lead by an active leadership team of Captain, President and Committee which represents the interests of the brigade.

Molonglo Rural Fire Service Brigade is a family oriented brigade (including a number of father and son / daughter combinations) with members from young to young at heart, all with a passion for helping the community.

We are a diverse range of individuals with our members being tradespersons, students, public servants, Defence members (serving and retired), small business owners and business professionals.

Molonglo Brigade is a relatively new brigade being established in 1997, and our members have varying degrees of skill, knowledge and experience, from the un-initiated through to people with significant fire fighting experience. We have a strong professional ethos even though we are volunteers, and pride ourselves on operating while always being conscious of individual and crew safety. Additionally, the brigade organises a range of fun, social activities throughout the year.

As a land manager in both the ACT and NSW (Googong Foreshores), the ACT Parks and Conservation Service (PCS) has a legal responsibility which includes managing bushfire fuels on its land and limiting the spread of fire on and from its lands.

PCS also supports the work of ACTRS with its large fire suppression capability (approximately 180 fire fighters) in the form of the PCS workforce, which constitutes the 'PCS Fire'.

For more information on PCS, please refer to the PCS website.

The Rivers Volunteer Bushfire Brigade is located on the Cotter Road approximately 1km past the Mount Stromlo Observatory turn off. The Rivers Brigade is unique in the fact that it is co-located with the State Emergency Services Unit. Rivers Brigade looks after the Weston Creek area out to the ACT border through the Brindabella's.

The Brigade is actively involved within the Community it assists by attending school fete's, helping with Greening Australia with their tree planting, community awareness activities and many other community events.

Rivers trains weekly during the fire season on Thursday nights from 7pm and trains on the first Thursday of the month out of fire season.

Southern brigade, based at Tharwa, is a volunteer bushfire brigade with a country atmosphere. Southern combines a rural base with closeness to the city, with the brigade being made up of a combination of landholders/farm-workers and keen volunteers from within Canberra.

There is a practical focus at Southern, and a strong sense of team. The role of Southern brigade is very much about protection of the southern area of the ACT, from Lanyon to the NSW border, and as such we may not get a lot of fires while volunteering at Southern, but they are often larger and require heavy commitment.

The brigade has training every month or so in the summer, and less often for the rest of the year.

Today the brigade has expanded to include committed and enthusiastic members from across the ACT. The brigade is very active at community events, including the Corinbank Music Festival, the Tidbinbilla Nature Reserve's Easter Extravaganza and Australia Day BBQ, among others.

We actively participate in hazard reduction burns and firefighting operations in the Tidbinbilla Valley and across the ACT, as well as interstate, as part of ACT Rural Fire Service Taskforces. As a small brigade our members get an opportunity to be involved in more activities and training opportunities than members of the larger brigades.