The fire has been extinguished.

It was initially feared an elderly woman may have been inside the home but a search of the property by firefighters wearing breathing apparatus has confirmed the building was unoccupied.

Part of the roof is at risk of collapse due to damage caused by the fire. 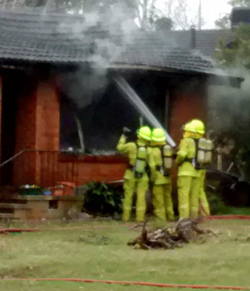 Firefighters dampen down after extinguishing a house fire in Waramanaga. Pic by Murray Charlton.